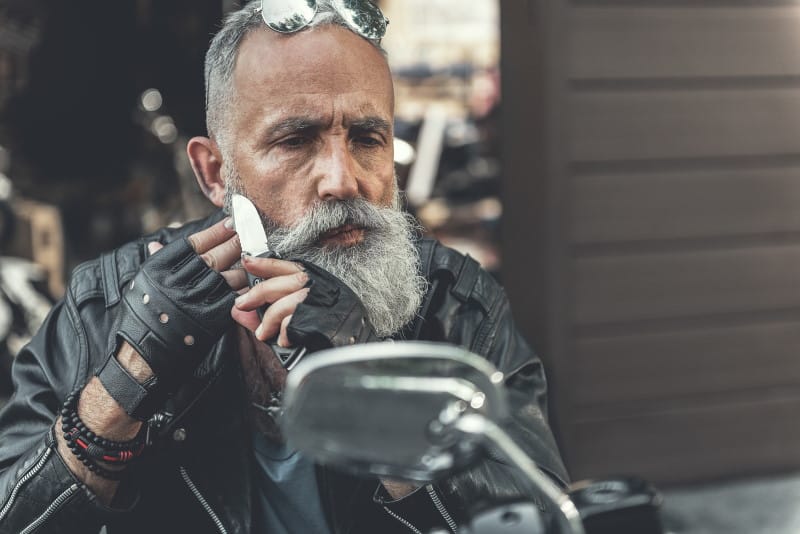 As weird as it may sound, many beard groomers have a Swiss army knife in their grooming kit. Perhaps, it’s something you’ve only seen in the movies. However, it is a common thing and not new at all.

A Swiss army knife is a multi-tool designed to act as a bottle opener, screwdriver, scissors, knife, etc. The knife is very sharp and can be used to cut many things. Since this tool is known for its cutting abilities, it is natural to wonder, “Can you shave with it?”

Yes, you can. Although using a Swiss army knife to shave is not the smartest or easiest thing to do, it is a cheaper alternative than a razor. Its blade is thicker than a razor, which will give you a steeper tapering at the cutting edge.

This post will explore how you can shave with a Swiss army knife and some safety precautions to follow when shaving with it.

Is It Dangerous to Shave With a Swiss Army Knife?

This depends on your experience with the tool. If you’ve been doing it for a while, you should know how to handle it safely. You can find out how sharp the knife is by shaving a small part of your arm hair, knowing that your beard hair is tougher and will need a sharp knife to do a good job.

When using a multi-tool blade to shave, you need to be careful, or else there will be consequences. A sneeze during a shaving session may result in a big cut on your face. This can even happen when using a normal razor. So, if a razor blade can easily give you this cut, imagine how easy it will be to get injured if you are not careful when using a sharp Swiss army knife to shave.

Some men believe that using a knife to shave comes with the same risk as using a razor blade to shave, even if a knife looks scarier.

The bottom line is that you need experience to shave with any tool, whether a knife or razor blade, to avoid getting hurt. If you get hurt on your first attempt, don’t worry, chances are you will become more skilled with practice. Soon you will get used to it and it will be a fun experience.

How Do You Shave With a Swiss Army Knife?

Using a Swiss army knife to shave will require lots of practice and patience. Using this knife will give you a close shave, especially when pressure is applied to a particular angle. So, be careful and patient when using this tool.

Using a Swiss army knife to shave can be time-consuming. You will need to spend at least 15 minutes with it. If you aren’t ready to be this patient, I wouldn’t suggest you use it.

Below are the steps to follow when you want to shave with a Swiss army knife.

Your beard is likely to be tough but you can soften it with warm water or steam. Shaving immediately after having a warm bath works well.

Practice Makes Perfect When Shaving With a Pocket Knife

Grasping your knife too straight or too slanted can give you a cut on the face. It’s better if you can take the first pass at a steep angle, staring at a position close to your ear and above your cheek. Ensure that each pass you make is balanced and short. Don’t start a new stroke from your prominent facial features such as your chin or jaw. Slight pressure should be applied to these points.

When you hold your nose up, you should have a smooth and painless stroke since your upper lip is taut. Ensure you shave your neck along the grain. Don’t stroke any area if there isn’t shaving foam or cream on it. Also, the pattern of hair growth varies, so you should handle the knife according to the length of your beard.

Things to Consider Before Buying a Swiss Army Knife for Shaving Before you buy a Swiss army knife for shaving, you need to consider the following:

How Do You Sharpen Your Swiss Army Knife?

To know if the blade of your knife is in good shape, use a microscope to observe it. Under a microscope, you will see that your blade has several teeth that look like saw teeth. If you have a dull Swiss army knife, the teeth on the blade’s edge will be pointed in different directions and be irregular. You will need to sharpen the knife to restore it to the original condition.

This is where stropping and honing the blade of your knife comes in.

Having a properly maintained and sharp Swiss army knife will reduce the risk for nicks, burns, cuts, and irritation.

Cleaning and Storing Your Pocket Knife After Shaving Leaving the blade of your Swiss army knife unclean after use means you are exposing the blades to harmful bacteria, dirt and oil.

To keep your Swiss army knife clean, ensure that you follow these steps:

Since you now know that you can shave with a Swiss army knife, ensure that you take care of your blade to ensure a safe and close shave. Make sure it is sharp and clean. Clean the knife after every use and sharpen it when it’s dull to avoid hurting yourself. Also, hydrate your skin to prepare it for shaving, and hold the blade at the right angle. Check out how often you should shave here.

If you’ve shaved with a razor blade, you should be familiar with the pain you may go through while or after using it. Razor burn is the term most commonly used. To avoid this problem, you can use a Swiss army knife to get a close shave. No matter how weird using a knife to shave may look, it is a great alternative to a razor and is a skill every man should have.